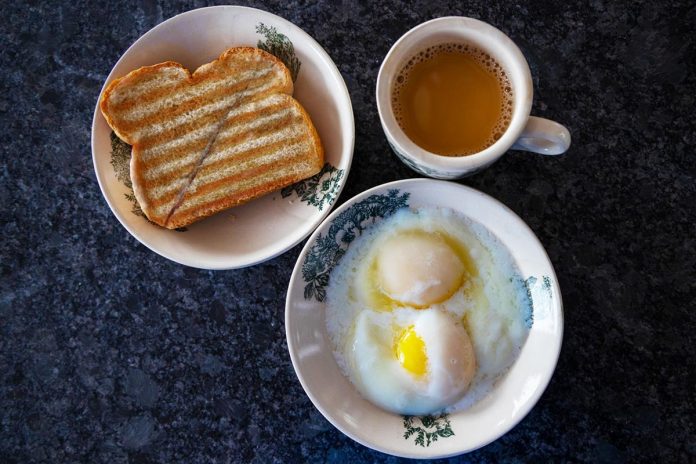 Singaporean food culture has to be one of the most diverse food cultures in the world, mixing Malaysian, Chinese, Indonesian, Indian, and Western cultures. If you plan to visit Singapore, this list will uncover the best 10 must-fry food in Singapore for you!

Singapore is an eastern tropical country, so the weather is hot there, so ending your meal with a cold dessert like ice kachang is a great idea! Ice kachang is grated ice with a base of jelly, atap seeds, corn, and sometimes red beans, smothered with different sweet syrups.

Some people may think this delicious Singaporean dish is a dessert when they first hear its name, but it’s not a cake or a dessert! Carrot cake is made with white and preserved radish, eggs, and rice flour. It’s a must-fry food in Singapore, according to our guests!

Char Kway Teow is a favored dish in Singapore and can be found in hawkers centers and restaurants. Char Kway Teow is fried noodles with black soy sauce, fish cakes, Chinese sausages, clams, and bean sprouts. Despite being such a good dish, many skilled chefs can one-up it by cooking the noodles at extreme temperatures!

Kaya toast is a traditional Singaporean breakfast and is considered an older-generation dish. Just with some thin slices of bread, slathered with some coconut jam or kaya, a generous amount of butter alongside two soft-boiled eggs with soy sauce, and there you have it, a must-fry food in Singapore done in just a few minutes!

Laksa is an elegant dish loved by all sorts of people in Singapore. This magnificent dish results from the harmony between Chinese and Malaysian cultures. Its creamy, sweet, savory flavor will explode in your mouth and leave an unforgettable gourmet experience!

Roti Prata was first introduced to Singaporeans by Indian immigrants during the early trading days. Since then, this Indian flat bread has been long loved by the local communities. The basic version of this dish is served either plain or with a raw egg in the middle, and many of our viewers have commented that it’s a must-fry food in Singapore!

Satay is rather a Singaporean version of the famous kebab. Its origins can be traced back to the Spice Trade era when Arab traders came to Southeast Asia. Ever since the cooking method and recipes have differed greatly to fit the various ethnic communities.

Bak Chor Mee has many similar versions served in China and other Asia countries, but its origin is from Singapore. Bar Chor Mee is an egg noodle dish served dry with minced pork, some other pork ingredients, eggs, and a special sauce made with black soy sauce, vinegar, and chili.

Wanton Mee stands at a high tier in our must-fry food in Singaporelist. It’s considered the most famous Chinese Cantonese in Singapore and usually consists of egg noodles, Wanton dumplings, boiled veggies, and some char siu slices.

Bak Kut Teh is made by cooking pork ribs in water with white pepper, garlic, and salt until the meat is juicy and tender, and the flavor of the ingredients blends in with the pork bones, making a savory soup.

And there you have it, the best must-fry food in Singaporefor you to enjoy during your trip to Singapore. Don’t forget to put some of these dishes on your what-to-eat list when you visit Singapore. If you want to discover articles like this, follow us more!

Why Don’t Energy Drinks Give Me Energy – A Thorough Explanation

How To Get Light Skin Curly Hair – Make It In-Vogue Or Not?

ABOUT US
Life is like a coin. You can spend it any way you wish, but you only spend it once.
FOLLOW US
© EatSmileBreathe.com - All rights reserved.
wpDiscuz